OMG, I just found out that I taught at the bombers' elementary school 10 years ago
WHEN THEY WERE THERE.  Ewwwww.  I'm so grossed out.
I didn't teach them, my friend had those grades, but I'm so creeped out.
Sixth Degree: John Tlumacki, photographer for the Botston Globe and Sports Illustrated.  These are some of his photos from the April 15 bombing of The Boston Marathon yesterday.  My husband and I were not home in Massachusetts when it happened.  It's April vacation, so we were en route to Maine at the time.  To say that the news was heartbreaking would be understating our feelings.  We called friends of ours who go to the marathon every year.  Thankfully, they are fine and were not in the blast zone at the time. 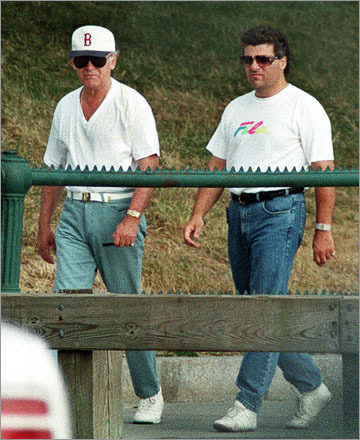 Fifth Degree: Mr. Bulger was played by Jack Nicholson in the 2006 movie, The Departed.

I hope that whomever did this is getting the impression that it is NOT WISE to mess with the people of Boston, much less, slaughter one of their children, and mame and kill others.  As Jesus said, "It would have been better that man would never have been born."  To kill the innocent is to kill Christ.

Fourth Degree: Mark Wahlberg, one of Boston's own, daily communicant at mass, and one of the stars of The Departed.  Here he is with pop-star, Justin Beiber. 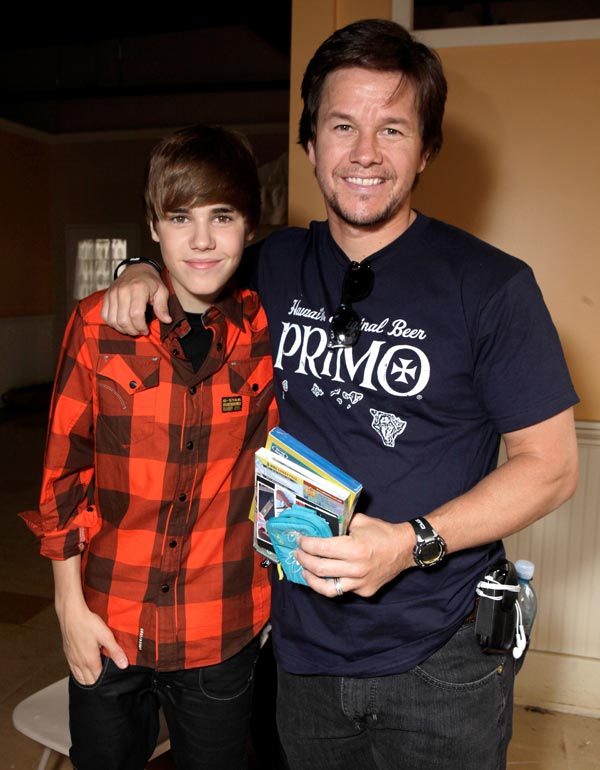 Second Degree: President Obama sent his official good wishes to Pope Francis on his elevation to The Papacy.  Read that here.

Guess who elevated Bergoglio to cardinal? 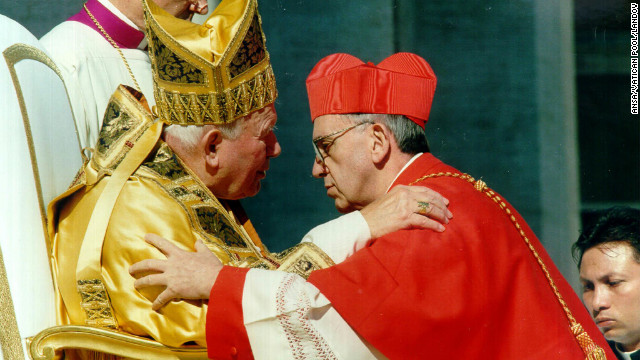 These are 4 miserable degrees of misunderstanding, poor tasted, and tragedy.

"The Innocence of Muslims" was the excuse/reason for the invasion of the United States Embassy in Libya and Cairo and the subsequent assassination of the US ambassador to Libya.  To call "The Innocence of Muslims" a "film" is like calling a petrified turd a diamond.  I wish the media would stop referring to that rubbish as a "film".  My personal guess on the identity of Mr. Bacile is that his name is Imm or Imbacile! 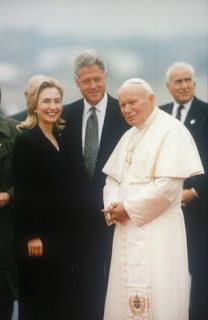 Jonathan Sacks, Rabbi for The United Kingdom has great wisdom to share with us on the concept of foreigness and the dignity of difference.  I love how he speaks about finding God in those who do not share our beliefs without sinking into moral relativism.  It is voices like his that bring peace to our world.  Guns and bombs will never work toward this holy end.  May those who died in the Middle East and Northern Africa this week not be in vain and may their memory be eternal.

Watch this video and contemplate what he says.  The scriptures to which Lord Sacks referrs were those read by Jesus for His edification.


"Alan Roberts" skit youtube movie was the excuse for the murder of Chris Stevens appointed and mourned by Barak Obama whose Secretary of State is Hilary Clinton who met John Paul II when she was first lady of The United States.

Posted by Horan Paypah at 6:44 PM No comments:

Ralph Lauren, designer with Western American chops for chaps, designed the uniforms for the U.S. Olympic team.  Ralph looks like this. 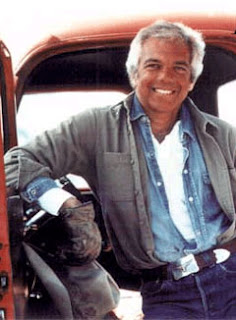 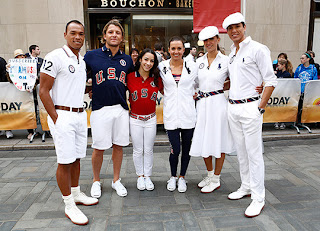 This evening, this image was projected on the British House of Commons either during or immediately after the Olympic Opening Ceremonies. 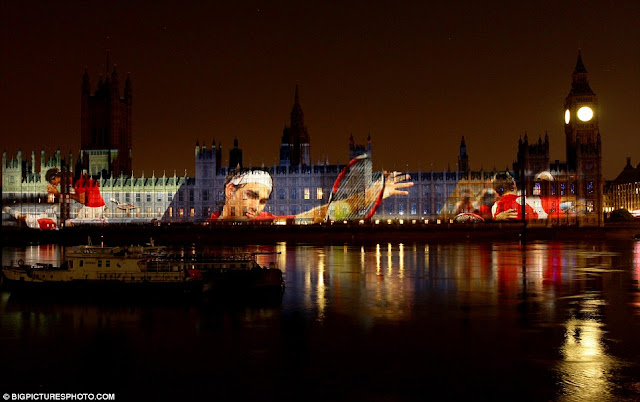 It's second degree, Roger Federer's image!  Roger is playing in this summer's Olympics.  He met Pope Benedict XVI.  The Pope issued an Olympic message of hope and peace at today's Angelus. 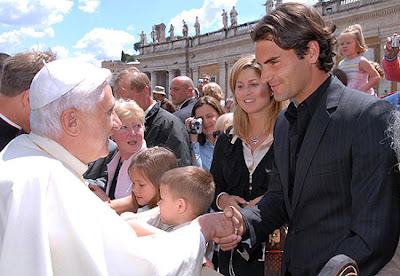 Pope:  "Roger, you are Swiss.  Perhaps you could join the Swiss Guard and be the first member of the Vatican Olympic Team?"

Roger:  "I'm not single, you have to be single to be a Swiss guard.  Of course I'm deeply honored by your request."

Posted by Horan Paypah at 4:06 PM No comments: 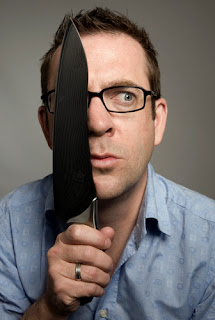 Fourth degree, Ted Allen hosts the show that is my latest obsession, Chopped. 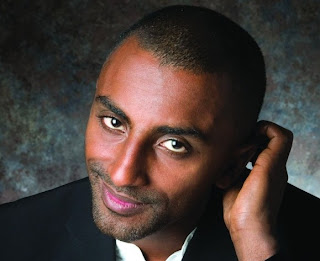 Third degree, Marcus Samuelsson is a judge on Chopped, and one hell of a cook!  He cooked for this second degree guy 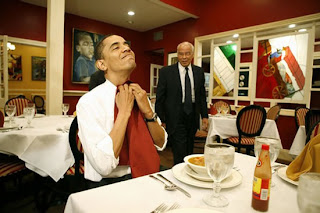 when he had a fundraiser at Samuelsson's restaurant. 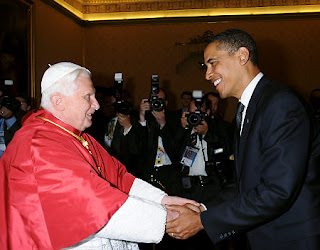 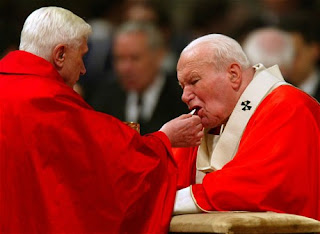 Posted by Horan Paypah at 5:58 PM No comments: 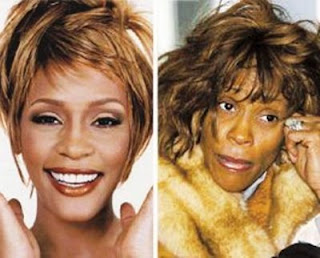 Whitney Houston has died at the age of 48, a victim of herself.  Each year we receive the news of deaths due to drug and alcohol use with shock and surprise.  Michael Jackson, John Belushi, Lady Diana (the driver was drunk), and others were a real loss to our culture.  Now we have Whitney Houston joining their ranks.

Whitney did a series of concerts in South Africa in 1994 to honor Nelson Mandela.  Here is an excerpt from those concerts.

Mandela and John Paul II knew what Dr. Martin Luther King Jr. knew, besides fight or flight, there is a third, better option.
Posted by Horan Paypah at 11:55 AM No comments:

It was with great pleasure that I received the news that Newt Gingrich had converted to Catholicism.  Now he's running for president.  With South Carolina under his belt, he may well be the Republican nominee, but it is doubtful that Mr. Gingrich has what it takes to be president.  His dirty laundry is being aired, and it ain't sweet smelling!

He has spoken out powerfully about traditional family structure, but requested an open marriage from the second of his (as of yet) three wives.  He's not handled his personal finances well, leading a life where he is perpetually broke.  He also tried to write an apologetic tell-all book, but was stopped by aides.  He also had a torrid High School affair with his math teacher.  Newt also has a tendency to put his foot in his mouth.
This leads to awkward headlines, like this one, "Newt Gingrich: Child labor laws are stupid"

What's truly amazing about Gingrich's success in South Carolina is that he probably won because the Evangelical Protestants probably voted for him because they'd rather have a Catholic than a Mormon.  Now that's just sad!  Appealing to racism and religious prejudice seems to be par for the course for Gingrich, but his new found religion won't stand for it.  45 Catholic leaders wrote an open letter to the two Catholic Republican candidates for president, Newt Gingrich and Rick Santorum.  The letter was published January 21, 2012 and reads as follows.


An Open Letter to Newt Gingrich and Rick Santorum
As Catholic leaders who recognize that the moral scandals of racism and poverty remain a blemish on the American soul, we challenge our fellow Catholics Newt Gingrich and Rick Santorum to stop perpetuating ugly racial stereotypes on the campaign trail. Mr. Gingrich has frequently attacked President Obama as a “food stamp president” and claimed that African Americans are content to collect welfare benefits rather than pursue employment. Campaigning in Iowa, Mr. Santorum remarked: “I don’t want to make black people’s lives better by giving them somebody else’s money.” Labeling our nation’s first African-American president with a title that evokes the past myth of “welfare queens” and inflaming other racist caricatures is irresponsible, immoral and unworthy of political leaders.
Some presidential candidates now courting “values voters” seem to have forgotten that defending human life and dignity does not stop with protecting the unborn. We remind Mr. Gingrich and Mr. Santorum that Catholic bishops describe racism as an “intrinsic evil” and consistently defend vital government programs such as food stamps and unemployment benefits that help struggling Americans. At a time when nearly 1 in 6 Americans live in poverty, charities and the free market alone can’t address the urgent needs of our most vulnerable neighbors. And while jobseekers outnumber job openings 4-to-1, suggesting that the unemployed would rather collect benefits than work is misleading and insulting.
As the South Carolina primary approaches, we urge Mr. Gingrich, Mr. Santorum and all presidential candidates to reject the politics of racial division, refrain from offensive rhetoric and unite behind an agenda that promotes racial and economic justice.

For the 45 signatures and the original posting of the letter, click here.   I'm sure that many of the 45 have met Pope Benedict XVI and perhaps some would have met Blessed John Paul II.
Posted by Horan Paypah at 4:12 PM 2 comments:

The angels are singing "At Last" as their Etta James enters the Kingdom.  May her memory be eternal.
Perhaps I'm a bit partial to Ms James.  This was the first dance for my husband and me.  No doubt some of you had the pleasure of this being your first song as well.  Let's explore Etta James and link her to Blessed John Paul.

If you're letting this video play while reading the blog, you are realizing that Etta James is more of a jazz singer than strictly a pop or R&B singer.

Reckoning #1, Bloodline and an underworld 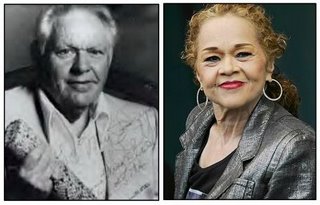 Etta's mother, Dorothy Hawkins, was 14 in 1938 when she gave birth to Jamesetta (Etta took her first and last stage name from this original name).  Though she never really knew who her father was, she speculated it was Minnesota Fats, the famous pool player.  Fats never admitted his age, but he was probably born within the first 15 years of the 20th century.  That would make him about 20 years older than Dorothy when Etta was conceived.  Do you see a resemblance?

Here's Minnesota Fats talking smack and shootin' pool, what he did best.  I remember him on TV in the 70s.  My parents got such a kick out of his smack talk and amazing pool shots.

Both Etta and Minnesota had movies made about them.  Etta was played by third degree, Beyonce Knowles.  Her possible father, Minnesota Fats, was played by Jackie Gleason in the 1961 movie, "The Hustler."  Gleason won an Academy Award for that role.  In the 60s, he made this campaign ad for Richard Nixon.  We have a bad connotation with Richard Nixon's name now, but, in light of the shenanigans our current government is getting up to with SuperPacs, insider trading in Congress, and swinging Republicans for family values, Nixon is looking more and more like a boy scout!

In 1957, before becoming president, Richard Nixon met Pope Pius XII.  Later, as president, he met Pope Paul VI from whom Blessed John Paul II got half of his name.

When Etta was 14 her life changed, she was taken under the wing of Johnny Otis, The Godfather of Rhythm and Blues.  Otis' and James' age difference mirrored that of Minnesota Fats and Dorothy Hawkings, but, instead of sexual exploitation, Otis mentored the young girl.


Otis' older brother became a diplomat.  He was US Ambassedor to Jordan and then to Egypt, where he knew and worked with First Degree, Hosni Mubarak.


Otis produced hundreds of albums and discovered scores of artists.  He produced the original version of the Lieber and Stoller tune, Hound Dog, a song later made famous by Elvis Presley.  Here is the original version by Big Mama Thornton.  Guess who met second degree, Richard Nixon?
To recap, Etta James is four degrees from Pope John Paul II.
She is 5 degrees by these reckonings.

Posted by Horan Paypah at 7:40 AM No comments: